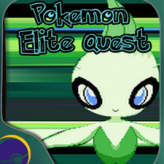 Everyone wants to be a Pokemon Champion! But you wanted to be a part of the Elite Four! Start your amazing Pokemon adventure with a new goal in Pokemon Elite Quest! Explore the region of Solia, learn new Pokemon moves, and be one of the Elites.

Pokemon Elite Quest is a good ROM hack developed back in 2010. In this game, everyone knows the story of Red from Kanto region and Gold from Johto region, and every trainer wants to follow their footsteps. Follow the story of a 15-year-old boy who is getting his first Pokemon from Professor Palm, as he starts his quest to beat the Elite Four and be one of them! The game features an entire new region called Solia, new and amazing Pokemon moves, Generation IV and V Pokemons, Side quests, and mini games!

Play Pokemon Elite Quest game online in your browser free of charge on Arcade Spot. Pokemon Elite Quest is a high quality game that works in all major modern web browsers. This online game is part of the Adventure, Strategy, GBA, and Pokemon gaming categories. Pokemon Elite Quest has 3 likes from 3 user ratings. If you enjoy this game then also play games Pokemon Fire Red Version and Pokemon Emerald Version. Arcade Spot brings you the best games without downloading and a fun gaming experience on your computers, mobile phones, and tablets. New arcade games and the most popular free online games are added every day to the site.