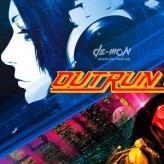 Race your way to glory as you beat your opponents and set a new record in Outrun 2019. Outrace other speedster and make yourself renowned in the racing world. Use the secret diverges scattered on the to get to the next route quicker. Ready your engine and good luck!

Outrun 2019 is a racing video game developed by SIMS Co., Ltd originally released in the year 1993 for Sega CD. In this game, you will be riding a rocket-boosted car as you drive your way in every stage in a limited time. Reach the checkpoint area before the time runs out to receive extended time that will allow you to progress further with the game. Avoid colliding with other speedsters and objects as they can slow you down. There are four different stages included in the game. As you advance on each stage, the routes will beg split into different roadways, and each road has their own set of obstacles that you need to overcome.

Play OutRun 2019 game online in your browser free of charge on Arcade Spot. OutRun 2019 is a high quality game that works in all major modern web browsers. This online game is part of the Racing, Arcade, Emulator, and SEGA gaming categories. OutRun 2019 has 1 likes from 1 user ratings. If you enjoy this game then also play games OutRun and OutRunners. Arcade Spot brings you the best games without downloading and a fun gaming experience on your computers, mobile phones, and tablets. New arcade games and the most popular free online games are added every day to the site.