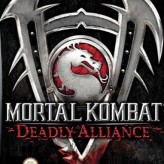 Bring the classic action game back with this popular 90’s video game – Mortal Kombat – Deadly Alliance. Choose your best character and defeat them all with your sick moves.

Mortal Kombat – Deadly Alliance is a two-dimensional fighting game initially released in 2002 and developed by Midway Games. The game mainly focuses on fighting brutally in an arena where each character has its own individual fighting styles. Because this is the GBA port of the game, the moves that can be used have been limited due to the limitations of the GBA console, forcing the player to make use of the special moves available. Swords and special abilities can now be used separately by pressing specific buttons. After each battle, you will receive “Koins” that acts as the game’s currency that can open coffins in the Krypt allowing you to unlock secrets within the game. Have fun and good luck!