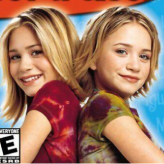 Solve a mystery by completing a jigsaw puzzle! Avoid some pit and play as the twins in this old-school girl game – Mary-Kate & Ashley – Get a Clue! Get a deja vu with the Olsen Twins in this GBC game.

Mary-Kate & Ashley – Get a Clue! is a Game Boy Color (GBC) game based around the celebrity twins Mary-Kate & Ashley who were famous at the time. Released back in 2000, the game assumes a detective route into solving mysteries, however, the game ends up in solving jigsaw puzzles and other mini-games. The game features 50 levels where the girls must collect various puzzle pieces that require using all of their character’s special abilities. If one of the two characters suffers a demise, the stage has to be repeated from the very beginning.