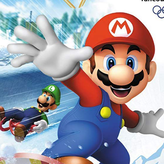 Play with Mario, Sonic, and the rest of the gang in this fun party game themed around winter sports - Mario & Sonic at the Olympic Winter Games! Go on Adventure Tours and challenge bosses from the games; Dr. Eggman and Bowser.

Mario & Sonic at the Olympic Winter Games is a 2009 sports and party video game released for the Nintendo Wii and Nintendo DS (NDS) gaming consoles. Following the game Mario & Sonic at the Olympic Games, this game features all of the previous characters and four additional characters to choose from. The game follows the same rules and gameplay as its predecessor but features Winter-themed sports and challenges. Will you be able to ace on all the challenges and become the champion? Good luck and have fun!