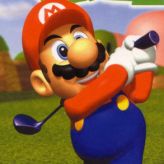 Play a laid back game of golf with Mario and the gang in this cartoonish sports game. Join Mario in the extensive and exclusive single player campaign in Mario Golf! Create your character and face Mario and his team in this golf themed role playing game!

Mario Golf (also known as Mario Golf GB) is a portable handheld version of the game Mario Golf 64. However, unlike the original game, the Game Boy Color (GBC) version features role playing elements mixed to its gameplay. In this game, you can create your own character by choosing a gender, portrait, name, and modify other stats. You will then join with the golf tournament where you try to play golf against other people. In the story, you will eventually meet Mario and the rest of the gang, and be able to play golf with them. Have fun!

Play Mario Golf game online in your browser free of charge on Arcade Spot. Mario Golf is a high quality game that works in all major modern web browsers. This online game is part of the Arcade, Sports, Mario, and GBC gaming categories. Mario Golf has 7 likes from 7 user ratings. If you enjoy this game then also play games Super Mario Bros. and Super Mario 64. Arcade Spot brings you the best games without downloading and a fun gaming experience on your computers, mobile phones, and tablets. New arcade games and the most popular free online games are added every day to the site.