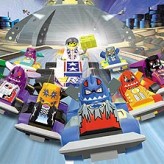 Start your engines and get ready for some blocky ride! Team up with the toughest drivers in the Lego Universe and win in Lego Racers 2! Race on five different worlds starting your hometown and collect all golden bricks!

Lego Racers 2 is a 2001 racing game following up the success of the first title back in 1999. The game is released in multiple platforms including the handheld system Game Boy Advance (GBA). Unlike the original Lego Racers, the game allows players to race and drive around freely with other characters you can talk to. The game features more characters, five different worlds, and various power ups that you can use to aid you in your race! Step into that pedal as you race across the Lego Universe in this wonderful game.

Play Lego Racers 2 game online in your browser free of charge on Arcade Spot. Lego Racers 2 is a high quality game that works in all major modern web browsers. This online game is part of the Racing, Driving, Emulator, and GBA gaming categories. Lego Racers 2 has 2 likes from 2 user ratings. If you enjoy this game then also play games LEGO Indiana Jones Game and Lego Ultimate Spider-Man Game. Arcade Spot brings you the best games without downloading and a fun gaming experience on your computers, mobile phones, and tablets. New arcade games and the most popular free online games are added every day to the site.