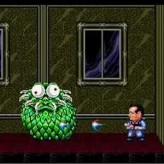 Guide the squad of the Caucasian Ghost busters through six haunted levels! Defeat and capture tons of ghosts while earning cash in the Sega Genesis version of Ghostbusters! Explore several haunted locations and get to the bottom of the mystery!

The 1984 Ghostbusters game for Sega Genesis is an action platformer game featuring characters from the popular film and TV series of the same name. Unlike the NES version that plays more similar to Pac-Man, the Sega version is a sidescrolling shooter where your character will battle ghosts and abominations to clear levels. Encounter ghoulish creatures, lay traps, and use your ghost busting tools to get the job done! Will you be able to handle it? Have fun!

Play Ghostbusters game online in your browser free of charge on Arcade Spot. Ghostbusters is a high quality game that works in all major modern web browsers. This online game is part of the Arcade, Shooting, Emulator, and SEGA gaming categories. Ghostbusters has 4 likes from 4 user ratings. If you enjoy this game then also play games New Ghostbusters 2 and Extreme Ghostbusters. Arcade Spot brings you the best games without downloading and a fun gaming experience on your computers, mobile phones, and tablets. New arcade games and the most popular free online games are added every day to the site.