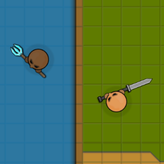 Doomz IO is a fantastic multiplayer survival IO game where the player must battle against all the other players from around the world to survive. Start with nothing but your bare hands. Survive by scavenging items and digging for gold. This game will get you fighting for your survival, one slash and hack at a time. Prepare for battle because this will be hectic. Tonight, you will dine in digital hell!

Time for some survival. Doomz IO is a multiplayer survival game where you must fight against others to survive. Start by being placed in a lobby bare-handed. As you defeat other players, you become stronger, and only the strongest would survive. Survive by defeating other players or by scavenging for supplies. Collect items to help you stay longer and defeat other players all over the world. Once you think you're strong enough, then start bashing other players in this battle royale. Collect gold to buy weapons and skins so you can win in style. A top-down online game that features non-stop action, Doomz IO combines the pace of most online games with the strategy needed to survive. Other players would try their best to defeat you at the beginning, so plan accordingly. With minimal graphics and simple gameplay, it will get you hooked and looking for more in no time. Share to friends your achievements or challenge them for a round or two. Dominate the online scene by being on the move and collecting at the same time. The possibilities are endless as you fight to be the last man standing.

Play Doomz IO game online in your browser free of charge on Arcade Spot. Doomz IO is a high quality game that works in all major modern web browsers. This online game is part of the Arcade, Multiplayer, Unity, and IO gaming categories. If you enjoy this game then also play games Pokemon Fire Red Version and Super Mario Bros.. Arcade Spot brings you the best games without downloading and a fun gaming experience on your computers, mobile phones, and tablets. New arcade games and the most popular free online games are added every day to the site.