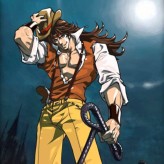 Step into the past and bring back the bloodline of the vampire killers. Face against the vampire countess Bartley in Castlevania: Bloodlines! Take control of the whip-wielding John Morris or the master lancer Eric Lecarde and try to stop the countess from resurrected their overlord Dracula.

Castlevania: Bloodlines (also known as Vampire Killer in the PAL region) is a 1994 action platformer video game with traditional Castlevania gameplay. Released for the Sega Genesis/ Mega Drive gaming console, the game features six levels of monster-infested dungeons that you must overcome. Gain various artifacts and wield their holy powers and gather your strength to fight off the countess and defeat the resurrected Dracula to end his terror and bring peace back to the land. Good luck!