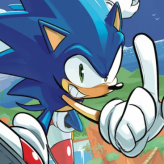 Tired of all the action and want a relaxing game with a familiar face? Sonic IO Club gives you the Blue speedster in an Input-Output online game. IO games are browser-based games with a few mechanisms, casual, minimalist design for levels, and a multiplayer component.

Play with as much as twenty other players on one level. Collect rings and avoid obstacles in this top-down, colorful game. Move Sonic with your mouse and collect rings while avoiding dangers in the game, no spikes, no loops to jump. A big red gun shoots and ends your playthrough. Hazards also appear as big triangles with exclamation marks in the middle. Your score would be shown after every match, which includes your best, survival time, and best survival time. Popular members of the Sonic Team come as skins, and you can get them by collecting rings. Play as Knuckles, Tails, or Ray and beat your best score. All skins cost 10000 rings, which act as the game’s currency. Survive the game longest while collecting rings along the way. Share your achievements through popular media platforms such as Twitter and Facebook. Compete with your friends for bragging rights on who is the better Sonic. Simple, yet adrenaline pumping and will get your speed fix in no time. So what are you waiting for? Get ready to play Sonic IO Club and show them what you got.

Play Sonic IO Club game online in your browser free of charge on Arcade Spot. Sonic IO Club is a high quality game that works in all major modern web browsers. This online game is part of the Arcade, Multiplayer, and IO gaming categories. Sonic IO Club has 1 likes from 1 user ratings. If you enjoy this game then also play games Sonic 3 Complete and Sonic Mania Edition. Arcade Spot brings you the best games without downloading and a fun gaming experience on your computers, mobile phones, and tablets. New arcade games and the most popular free online games are added every day to the site.