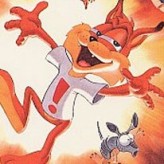 Defeat a gang of dive-bombing penguins and squash a squadron of flying pigs in this fun 2D platformer video game – Bubsy 2! Jump, glide and collect orbs! Get a nerf gun and shoot your enemies in this old school game.

Bubsy 2 is a platform video game originally released in 1994 for the Sega Genesis drive. The game is a sequel to Bubsy in Claws Encounters of the Furred Kind and is the second game to the Bubsy series. Game play is much similar to its predecessor but features many more variations. Defeat various enemies and enter different worlds through mysterious portals! Go on exploring in this wacky and whirlwind adventure through the Amazatorium. Have fun!

Play Bubsy 2 game online in your browser free of charge on Arcade Spot. Bubsy 2 is a high quality game that works in all major modern web browsers. This online game is part of the Adventure, Arcade, Emulator, and SEGA gaming categories. Bubsy 2 has 1 likes from 1 user ratings. If you enjoy this game then also play games Bubsy and Bubsy In Claws Encounters Of The Furred Kind. Arcade Spot brings you the best games without downloading and a fun gaming experience on your computers, mobile phones, and tablets. New arcade games and the most popular free online games are added every day to the site.