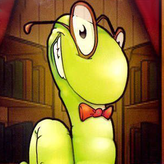 Outwit your opponent and create the longest, and most complicated word in one go in this word-forming puzzle video game - Bookworm! Create words after words to keep earning points and complete the levels with ease! Expand your vocabulary and sharpen your spelling skills as you play!

Bookworm is a word-forming puzzle video game that was released by PopCap games initially for Windows PC, but was later ported to various gaming consoles including Game Boy Advance (GBA). The goal of the game is to match adjacent letters to form an acceptable word in the English language. Longer words are worth more points and have a greater chance of producing bonuses. Different colored tiles also have special effects that allow the player to acquire more points.

Play Bookworm game online in your browser free of charge on Arcade Spot. Bookworm is a high quality game that works in all major modern web browsers. This online game is part of the Puzzle, Tricky, Emulator, and GBA gaming categories. Bookworm has 4 likes from 4 user ratings. If you enjoy this game then also play games Pokemon Fire Red Version and Pokemon Emerald Version. Arcade Spot brings you the best games without downloading and a fun gaming experience on your computers, mobile phones, and tablets. New arcade games and the most popular free online games are added every day to the site.