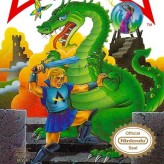 Take control of a 16-year-old student who suddenly got transported into another dimension. Go on a journey to save Princess Rosebud in Astyanax! Use the legendary axe that was granted to you by Bash and go on a wild adventure to the Blackhorn’s lair with a fairy by your side.

Astyanax (also referred to as The Lord of King) is a side-scrolling action platformer video game that is a port of the classic arcade game of the same name that was released in 1989. Ported for the Nintendo Entertainment System (NES) home console back in 1990, the game features a simple monster beat’em up gameplay. Unlike the classic arcade game which it was based on, the NES version has a different story, and art style, but with almost identical gameplay and mechanics.

Play Astyanax game online in your browser free of charge on Arcade Spot. Astyanax is a high quality game that works in all major modern web browsers. This online game is part of the Arcade, Action, Emulator, and NES gaming categories. Astyanax has 2 likes from 2 user ratings. If you enjoy this game then also play games Super Mario Bros. and Classic Tetris. Arcade Spot brings you the best games without downloading and a fun gaming experience on your computers, mobile phones, and tablets. New arcade games and the most popular free online games are added every day to the site.