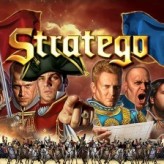 Play the classic war simulation game right in your browser in this solid computer version of the Milton Bradley’s board game – Stratego! Deploy your units at the right spot and carefully choose your moves to secure the victory.

Stratego is a classic strategy board/war game released back in 1990 for the MS-DOS platform. The game is based on Milton Bradley’s classic board game of the same name and features all tradition gameplay and mechanics. Similar to chess in many ways and can be compared to the Japanese Shogi, but only set in the modern age with guns and bombs. In this game, the player is allotted 40 pieces in the beginning of the game, and it’s up to the player where to place them. Each piece has their own movement rules and the units can only destroy or attack those with lower ranks than them. The goal of the game is to strike the enemy’s flag while defending your own.

This game is MS-DOS emulated, hence you can not use the mouse to play.

Play Stratego game online in your browser free of charge on Arcade Spot. Stratego is a high quality game that works in all major modern web browsers. This online game is part of the Strategy, Retro, Classic, and Challenge gaming categories. Stratego has 33 likes from 43 user ratings. If you enjoy this game then also play games Five Nights at Freddy's 2 and Five Nights at Freddy's. Arcade Spot brings you the best games without downloading and a fun gaming experience on your computers, mobile phones, and tablets. New arcade games and the most popular free online games are added every day to the site.