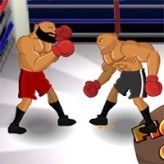 Step into the ring and start punching the consciousness off of your opponent in this cool cartoonish boxing game – World Boxing Tournament! Enter the tournament and fight rounds with your enemy. Select from four characters and learn how to punch!

World Boxing Tournament is an isometric boxing game with four characters to choose from. The game features 3 attacks: the jab, the body blow, and the hook. The attack goes from fastest to strongest respectively. Boxers can also use block to negate extra effect (such as knockdown) and reduce damage done to a minimum. The game also features two player hot seat mode so you can box with your friend! So what are you waiting for? Start your boxing career today!