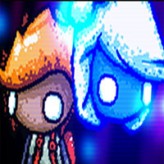 Join the two brothers who are separated by the fabric of life as they try to protect each other against an evil wizard in Tattle & Tale! Don’t forget to collect your inheritance while saving the souls of many!

Tattle & Tale is a platforming action-adventure game that tells the story of the two brothers: one in the living world, while the other is a ghost. In this game, the living brother must protect the ghost brother from the evil wizard who plans on stealing their souls to conquer the world. The goal in this game is to find all the lost souls before the wizard does.

The game is pretty big and takes a while to load. Saving and loading the game also takes a while. Thank you for your patience.

Play Tattle & Tale game online in your browser free of charge on Arcade Spot. Tattle & Tale is a high quality game that works in all major modern web browsers. This online game is part of the Adventure, Action, Retro, and Platform gaming categories. Tattle & Tale has 1 likes from 1 user ratings. If you enjoy this game then also play games Sonic & Knuckles + Sonic the Hedgehog 3 and Sonic the Hedgehog & Ashuro. Arcade Spot brings you the best games without downloading and a fun gaming experience on your computers, mobile phones, and tablets. New arcade games and the most popular free online games are added every day to the site.