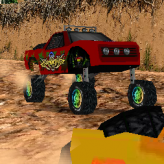 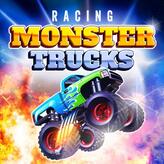 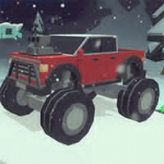 Go off road and race on a dirt track in Super Trucks 3D! Drive your awesome 4-wheel vehicle and compete against other fierce drivers. Choose a monster truck and race across various tracks to unlock even faster monster trucks!

Super Trucks 3D is an awesome racing game with punk-ass background music. In this game, you will race your monster truck on a dirt race track and try to win against other reckless drivers. The game features a total of 5 awesome monster trucks and 3 racing locations. Use your nitro to gain temporary speed boosts, and grab some nitro power ups to make your nitro boosts longer and more effective. Win against other racers and have fun!

Play Super Trucks 3D game online in your browser free of charge on Arcade Spot. Super Trucks 3D is a high quality game that works in all major modern web browsers. This online game is part of the Racing and Truck gaming categories. Super Trucks 3D has 1 likes from 1 user ratings. If you enjoy this game then also play games Super Mario Bros. and Super Mario 64. Arcade Spot brings you the best games without downloading and a fun gaming experience on your computers, mobile phones, and tablets. New arcade games and the most popular free online games are added every day to the site.