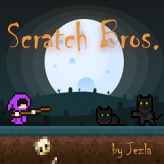 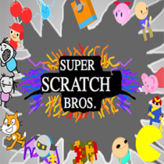 Play as your favorite video game superstar and destroy all the others in a competitive fighting match in Super Scratch Bros. Play as Mario, Mega Man, Sonic, or even Link and fight against other superstars in a frenzied brawl. Fight, win, and pose for victory.

Super Scratch Bros is a fan-made game based on the popular Super Smash Bros. This original project features many popular video game characters from PlayStation All-Stars including Mario and Luigi from Super Mario Bros. Mega Man from Mega Man series, Master Chief from Halo, Solid Snake from Metal Gear Solid, Link from the Legend of Zelda, and more. The game also features few original characters created by epiccatgames. Many ported characters have their own unique twists and quirks to find out. Just like the original Super Smash Bros., Super Scratch Bros is a fighting game with fast-paced gameplay and cool attack combos to discover and master.

Play Super Scratch Bros game online in your browser free of charge on Arcade Spot. Super Scratch Bros is a high quality game that works in all major modern web browsers. This online game is part of the Arcade, Multiplayer, Action, and Fighting gaming categories. Super Scratch Bros has 134 likes from 159 user ratings. If you enjoy this game then also play games Super Mario Bros. and Super Mario 64. Arcade Spot brings you the best games without downloading and a fun gaming experience on your computers, mobile phones, and tablets. New arcade games and the most popular free online games are added every day to the site.