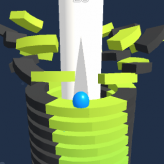 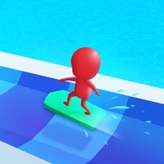 Step into the shoes of one of the Squid Game players and play the deadly version of Red Light, Green Light in SquidGame 3D. Run forward while the giant creepy doll isn't looking and stop moving while its eyes are on you. Avoid getting shot at and try to reach the finish line safely.

SquidGame 3D is 3D reaction-based running game based on the sensational Korean film Squid Game by Hwang Dong-hyuk. In this game, you will take control of a random person involved in the horrifying death game. The goal of the game is to reach the finish line within 60 seconds without getting spotted by the giant mechanical doll. An indicator is displayed in the upper right corner of the screen. If the indicator flashes red, you must stop immediately. If you move even an inch while the indicator is bright red, the doll will spot you, and the guards will shoot you down. Move forward when the light is green. Although the game allows you to move freely, doing so is not advised as you'll only waste time. When it is safe to move, run straight without regard to your fellow players and hope that the doll won't catch you.

Play SquidGame 3D game online in your browser free of charge on Arcade Spot. SquidGame 3D is a high quality game that works in all major modern web browsers. This online game is part of the Arcade, Running, Mobile, and Challenge gaming categories. SquidGame 3D has 3 likes from 3 user ratings. If you enjoy this game then also play games SquidGame IO and Pokemon World 3D. Arcade Spot brings you the best games without downloading and a fun gaming experience on your computers, mobile phones, and tablets. New arcade games and the most popular free online games are added every day to the site.