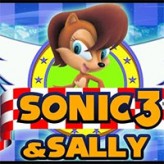 Play the role of the warrior princess chipmunk named Sally Acorn as you collect rings and battle enemies in Sonic 3 And Sally Acorn!

Sonic 3 And Sally Acorn is a fan-made ROM hack of the game Sonic the Hedgehog 3 for the Sega Mega Drive and Genesis console. The game features the same gameplay to the original Sonic 3 video game but features the wonderful fictional character named Sally Acorn. This ROM hack not only features a different main character from the original game, but also features new levels designed specifically for Sally. Unlike Sonic who is focused on speed, Sally is a lot slower, but with emphasis on agility based abilities, and stealth tactics. Will you be able to complete the game as Sally? Good luck!

Play Sonic 3 And Sally Acorn game online in your browser free of charge on Arcade Spot. Sonic 3 And Sally Acorn is a high quality game that works in all major modern web browsers. This online game is part of the Arcade, Action, Emulator, and SEGA gaming categories. Sonic 3 And Sally Acorn has 5 likes from 5 user ratings. If you enjoy this game then also play games Sonic 3 Complete and Sonic Mania Edition. Arcade Spot brings you the best games without downloading and a fun gaming experience on your computers, mobile phones, and tablets. New arcade games and the most popular free online games are added every day to the site.