Rugrats in Paris: The Movie 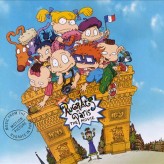 Follow the cute little babies as they go on a fun adventure to the city of love, Paris. Be a part of the babies in this adventure platformer video game – Rugrats in Paris: The Movie!

Rugrats in Paris: The Movie is an adventure platformer video game based on the movie of the same name from the Nickelodeon animated TV series, Rugrats. Released back in the year 2001 for multiple gaming consoles including Game Boy Color (GBC), the game follows the adventures of a group of young children as they go and explore in a European theme park! Follow Tommy, Phil, Lil, Angelica, Chuckie, or Kimi as you go and explore more than a dozen levels! Recor your progress with a password system and continue whenever you want! Good luck and have fun!