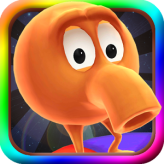 Play one of the most widely recognized classic game that still brings you fun and excitement. Conquer blocks while avoiding enemies in order to advance to the next round in Q-Bert.

Q-Bert is a two-dimensional arcade-puzzle game developed by Gottlieb and was first released in the arcade in October 1982. The objective of the game is to conquer the blocks in every round by changing its color by jumping on them as you avoid enemies and obstacles. You will start at the top of a pyramid type platform where you need to change a total of 28 blocks before you can advance to the next round. As you advance in the game, the difficulty will also be set higher and you will need to jump a block two times (or even more) to conquer it making the game more challenging. Jumping on flying discs transports you back on top of the pyramid. Points are earned when you conquer a block, and an extra life is provided when you reach a certain score. Note that you only have a maximum of four lives in the beginning of the game. Good luck!

Play Q-Bert game online in your browser free of charge on Arcade Spot. Q-Bert is a high quality game that works in all major modern web browsers. This online game is part of the Arcade, Puzzle, Emulator, and NES gaming categories. Q-Bert has 1 likes from 1 user ratings. If you enjoy this game then also play games Super Mario Bros. and Legend Of The Blob Brothers 2. Arcade Spot brings you the best games without downloading and a fun gaming experience on your computers, mobile phones, and tablets. New arcade games and the most popular free online games are added every day to the site.