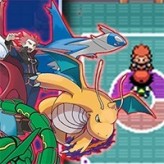 The Professor’s grandson suddenly ran wild! Stop him and his 8 subordinates and their genetically modified Pokemons from running wild in towns in Pokemon Advanced Adventure! Set out on a wild adventure in this cool Pokemon hack!

Pokemon Advanced Adventure is a Pokemon hack based on Pokemon Leaf Green and is the very first hack to use the Leaf Green Version as a base game. In Advanced Adventure, you are a child of the poorest family in town. Though you are poor, you still hoped to becoming a Pokemon trainer someday. One day, the professor called you in his lab! Grab this very opportunity and start your own Pokemon adventure! Create the best Pokemon rags to riches story and defeat all genetically modified Pokemons that are running wild and wrecking havoc in the towns!

There have been 85 likes from 99 votes on this game.