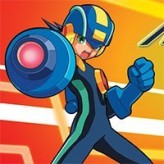 Play as Lan and travel across the world and fight other Navi users in a chip/ card-based action strategy game. Become the best NetNavi in Mega Man Battle Network! Collect powerful chips and use them wisely against your enemies. Trade chips and try to get your hands on the rare and powerful ones.

Mega Man Battle Network is an innovation from the normal Megaman formula. The game features all RPG elements that you love from the series, but with a card-based battle system mixed with strategy and pre-planning. In this game, you’ll play as a boy named Lan set in the year 200X. Unlike the other Megaman game series, this alternate world is set when AI programs were not funded. As a result, Dr. Hikari’s research led to the creation of PeT (Personalize Terminal). In this game, you will battle other NetNavis (Network Navigators) and their PeTs and join tournaments and save the world from an evil plot.

Play Mega Man Battle Network game online in your browser free of charge on Arcade Spot. Mega Man Battle Network is a high quality game that works in all major modern web browsers. This online game is part of the Adventure, Strategy, Emulator, and GBA gaming categories. Mega Man Battle Network has 1 likes from 1 user ratings. If you enjoy this game then also play games Pokemon Mega and Pokemon Omega Ruby. Arcade Spot brings you the best games without downloading and a fun gaming experience on your computers, mobile phones, and tablets. New arcade games and the most popular free online games are added every day to the site.