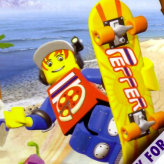 Ride skateboards, go scuba diving, or fly a plane in this awesome Lego game! Deliver all the pizza to the people in Lego Island 2 – The Brickster’s Revenge! Find the missing pieces from the Informaniac’s Constructopedia while doing all fun stuff!

Lego Island 2 – The Brickster’s Revenge is an action-adventure comedy video game that is a sequel to the first Lego Island game. Released back in 2001 for the Game Boy Color (GBC) hand held system, the game features a lot of activities and mini-games to play. The player must deliver pizzas to complete the first stage of the game, additionally, the player can engage in various non-compulsory activities, such as skateboarding at the skatepark and exploring the island. In order to fully complete the game, the player must also defeat the Dark Knight in a jousting tournament and dive underwater to retrieve bricks on Castle Island. Have fun and enjoy the Lego Island!