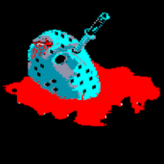 Step into the shoes of one of the six counselors at Camp Crystal Lake and try to save as many as you can from Jason’s murderous rampage in Friday the 13th. Find the children hiding in the cabins and fend off Jason himself.

Friday the 13th is a classic 1989 survival horror video game for the Nintendo Entertainment System (NES). The game is an adaptation to the Friday the 13th franchise and has a plot that is parallel of the film series and is considered a spin-off. In this game, you will take control of a counselor at Camp Crystal Lake and your goal is to rescue and save the children that are scattered in the woods from the murderous Jason. Although the game has a lot of negative remarks, it is still a game worth checking out.

Play Friday the 13th game online in your browser free of charge on Arcade Spot. Friday the 13th is a high quality game that works in all major modern web browsers. This online game is part of the Arcade, Retro, Emulator, and NES gaming categories. Friday the 13th has 5 likes from 6 user ratings. If you enjoy this game then also play games Friday Night Funkin and Friday Night Funkin’ Sarvente’s Mid-Fight Masses. Arcade Spot brings you the best games without downloading and a fun gaming experience on your computers, mobile phones, and tablets. New arcade games and the most popular free online games are added every day to the site.