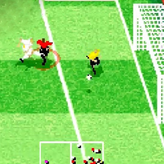 Take your very own team and challenge other teams to get a promotion in this wonderful football video game called FIFA 2004! Will you be able to rank up your team by winning? Good luck and have fun!

FIFA 2004, also known as FIFA Football 2004 and FIFA Soccer 2004, is a football sports video game that was initially released on 2003. The game is available on various gaming consoles including the PC and the Game Boy Advance (GBA) handheld gaming system. FIFA 2004 is the eleventh game in the FIFA series and is the eighth game to be created in 3D. Although it does not have much difference to the FIFA 2003 version, this game features secondary divisions, which allow the player to take lower ranked teams to promotion attempts.

There have been 25 likes from 27 votes on this game.

Play FIFA 2004 game online in your browser free of charge on Arcade Spot. FIFA 2004 is a high quality game that works in all major modern web browsers. This online game is part of the Sports, Soccer, Emulator, and GBA gaming categories. FIFA 2004 has 25 likes from 27 user ratings. If you enjoy this game then also play games FIFA 07 Soccer and FIFA 11. Arcade Spot brings you the best games without downloading and a fun gaming experience on your computers, mobile phones, and tablets. New arcade games and the most popular free online games are added every day to the site.