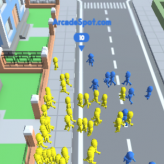 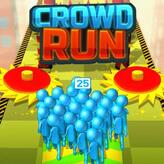 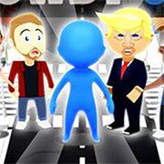 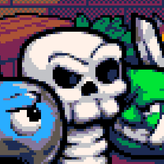 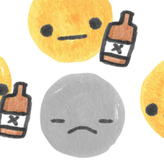 Wisdom and Madness of Crowds

Gather the biggest crown and turn the town upside-down in Crowd City IO! Gather the people around and crush the competition with overwhelming force in this competitive arcade game.

Crowd City IO is a multiplayer game that features your traditional competitive game mechanic found on every IO-type game. In this game, you start as a single person roaming around the city, looking for people (NPCs) to join you. The game's goal is to gather the largest crowd and defeat any other recruiter (or players) on your path. Recruit the bystanders or convince the other crowd to join you by 'eating' them up. Similarly, you must protect your crowd from other players, as they can get stolen if they stray too far from you.

Also known as CrowdCity.io, this game is all about bringing people together and outnumbering the crowds of other players in a short period of time. Just like in any other IO game, the rule of thumbs still works. Devour any player or crowd smaller than you while avoiding anyone bigger. Create an unstoppable crowd, kick out all the other players, take over the city, and leave your name on the glorious leaderboard for all to see.

Play Crowd City IO game online in your browser free of charge on Arcade Spot. Crowd City IO is a high quality game that works in all major modern web browsers. This online game is part of the Arcade, Multiplayer, and IO gaming categories. Crowd City IO has 2 likes from 2 user ratings. If you enjoy this game then also play games Crowd Run 3D and Crowdy City. Arcade Spot brings you the best games without downloading and a fun gaming experience on your computers, mobile phones, and tablets. New arcade games and the most popular free online games are added every day to the site.