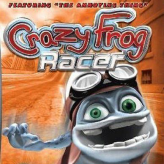 Ride along with the craziest frog in the world and go on a wild race in this fun Europe-exclusively video game for the GBA - Crazy Frog Racer!

Crazy Frog Racer is a racing video game that was released back in 2005 for the Game Boy Advance (GBA) handheld gaming system. The game features the popular Crazy Frog character that was popularized by the Crazy Frog song. In this game, the player will take control of the animated character named Crazy Frog and race around various crazy and wild terrain and tracks. The game was developed by Neko Entertainment and was followed by a sequel game a year later. Will you be able to finish all tracks and complete the game with the fastest time? Good luck!

Play Crazy Frog Racer game online in your browser free of charge on Arcade Spot. Crazy Frog Racer is a high quality game that works in all major modern web browsers. This online game is part of the Racing, Funny, Emulator, and GBA gaming categories. Crazy Frog Racer has 2 likes from 2 user ratings. If you enjoy this game then also play games Crazy Taxi - Catch a Ride and Crazy Roll 3D. Arcade Spot brings you the best games without downloading and a fun gaming experience on your computers, mobile phones, and tablets. New arcade games and the most popular free online games are added every day to the site.