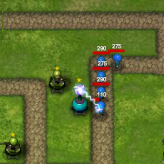 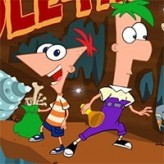 Phineas and Ferb: Escape from Mole-tropolis

Doctor Heinz Doofenshmirtz has created a horde of undead to assault the backyard of Phineas and Ferb! Deploy amazing turrets to fend off the undead in Backyard Defense: Phineas and Ferb! Create towers that will blast off the dead or electrocute them in this fun strategy tower defense game based on the popular cartoon.

Backyard Defense: Phineas and Ferb is an innovative tower-defense game featuring the iconic brothers from Disney Television Animation. Aside from the bonus tutorial stage, the game features a total of 15 challenging levels where a horde of Doofenshmirtz zombies will try and attack the house. Fortunately, the genius brothers have invented several kinds of turrets that will help repel the undead. However, the turrets alone are not enough to repel the invasion. Phineas and Ferb must also help by themselves by using their cool cannons.

Phineas features a vacuum-like cannon that will suck all enemies in the screen, then blast them away from the map - an effective crowd control ability. On the other hand, Ferb can electrocute all enemies in the vicinity for massive damage. Each level features a different backyard layout - some are more challenging while other layouts work in your favor. Will you be able to help the two protect their household?