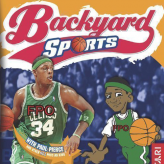 Play Basketball in your virtual backyard and be the best player in your neighborhood. Practice and win every match in Backyard Basketball 2007!

Backyard Basketball 2007 is a part of the popular sports series and gaming franchise called Backyard Games that emphasize informal 'backyard' sports. Backyard Basketball 2007 was the first game that was developed by Humongous and published by Infogrames Entertainment AI. This game consists of two primary game modes: Single game, and Season Play. In Single Game, the player is free to choose a team and compete against AI opponents. Season Play allows the player to select a team and compete against series of AI-controlled groups over an 18-game season. Season Play includes two best-of-three playoff series and best-of-five championship series. The Single Game mode also features a practice mode, so the player can have a quick training session using a single character. Before the game starts, the player can modify a variety of settings including Court selection, AI difficulty, specific rules (fouls, fatigues, violation, and others), and even team names. The second mode is the multiplayer mode where you can compete with other players using Game Boy Link. However, this mode is impossible to play because of the limitations of the browser-based emulator. Will you be able to outmatch and defeat the challenging opponent?