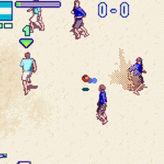 You think running on top of sand is hard? Try playing soccer! Wipe the sand of the competition and play the soccer tournament in Ultimate Beach Soccer! Perform cool tricks and aim for the goal!

Ultimate Beach Soccer is a 2003 Game Boy Advance (GBA) sports game that features fast-paced and competitive game play. In this game, your team will compete against various other teams in a soccer beach tournament. Showcase your soccer skills by performing different tricks in the sand. Impress the crowd, kick the ball, score a goal, and win the trophy! The fast-paced gameplay and Game Boy Advanced’s control limitation makes the game a bit tricky, but once you get used to the control, you’ll find the game really enjoyable.

Play Ultimate Beach Soccer game online in your browser free of charge on Arcade Spot. Ultimate Beach Soccer is a high quality game that works in all major modern web browsers. This online game is part of the Arcade, Sports, Emulator, and GBA gaming categories. Ultimate Beach Soccer has 2 likes from 2 user ratings. If you enjoy this game then also play games Ultimate Mortal Kombat Trilogy and Ultimate Spider-Man. Arcade Spot brings you the best games without downloading and a fun gaming experience on your computers, mobile phones, and tablets. New arcade games and the most popular free online games are added every day to the site.