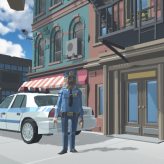 Try to outlast your opponent in a showdown at the top of a roof in Rooftop Snipers! Hit your opponent as quickly as you can to throw him away and win the duel!

Rooftop Snipers is a simple two button video game that, at first glance, may look easy, but will later prove to be quite tricky and difficult. Controlling your shots’ direction are very challenging and the enemy’s AI is good. Try to hit your enemy and knock them off the roof to score a point. The player with most points after eight rounds of duel wins the game. But if the score is tied, another match will take place! You can jump to avoid the projectiles but beware the trajectory of your shot may change and it can affect the outcome of the game. Try to use the falling objects to your advantage!

Play Rooftop Snipers game online in your browser free of charge on Arcade Spot. Rooftop Snipers is a high quality game that works in all major modern web browsers. This online game is part of the Arcade, Shooting, Action, and Unity gaming categories. If you enjoy this game then also play games Rooftop Shooters and Rooftop Royale. Arcade Spot brings you the best games without downloading and a fun gaming experience on your computers, mobile phones, and tablets. New arcade games and the most popular free online games are added every day to the site.