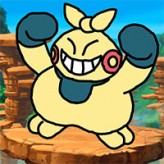 Set into the mysterious yet wonderful region of Borrius and start a new Pokemon adventure in this wonderful Pokemon hack – Pokemon Unbound! Stop the forces called “The Shadows” and save Borrius region from chaos and destruction.

Pokemon Unbound is a Pokemon ROM hack based on the original Pokemon FireRed version. The game tells the story of the Borrius Region who have unleashed a dark force to force the fight in their favor against the region of Kalos, that was otherwise a stalemate. Unfortunately, Kalos summoned their ultimate weapon that eventually lead to the defeat of Borrius. In this game, you play the role of a Pokemon Trainer who must help Borrius region from their inevitable downfall. Good luck and have fun!

Play Pokemon Unbound game online in your browser free of charge on Arcade Spot. Pokemon Unbound is a high quality game that works in all major modern web browsers. This online game is part of the Adventure, Strategy, GBA, and Pokemon gaming categories. Pokemon Unbound has 9 likes from 11 user ratings. If you enjoy this game then also play games Pokemon Fire Red Version and Pokemon Emerald Version. Arcade Spot brings you the best games without downloading and a fun gaming experience on your computers, mobile phones, and tablets. New arcade games and the most popular free online games are added every day to the site.