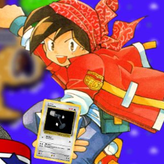 The sequel to the original Pokemon trading card game is finally here! Meet new opponents and explore a new island in Pokemon Trading Card Game 2 – The Invasion of Team GR! Create a new deck with more Pokemons and get all those shiny rare cards!

Pokemon Trading Card Game 2 – The Invasion of Team GR is a sequel to the Pokemon TCG for the Game Boy Color (GBC). Released only in Japan, this game is now fully translated in English so everyone can enjoy. The game builds a lot of improvement from the last title and features better color functionality, new series of cards, an entire new island to visit, and plenty of new Pokemon card players to duel against.