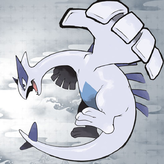 Play the remake of one of the most successful Pokemon games of all times and capture the legendary Lugia in Pokemon Soul Silver! Begin your journey and become the next Pokemon Champion.

Pokemon Soul Silver is a remake of the 1999 Pokemon Silver game for the Game Boy Color. Released back in 2010 for the Nintendo DS (NDS) handheld console, the game has many new features including the features found in Pokemon Crystal version. Similar to the original game, the goal of this game is to become the best Pokémon trainer in the Johto and Kanto region and capture all Pokemon to complete the Pokedex device. However, completing the Pokedex is not possible without trading from the other versions. Do you have what it takes to become the next champion? Good luck!

Play Pokemon Soul Silver game online in your browser free of charge on Arcade Spot. Pokemon Soul Silver is a high quality game that works in all major modern web browsers. This online game is part of the Adventure, Strategy, Pokemon, and Nintendo DS gaming categories. If you enjoy this game then also play games Pokemon Fire Red Version and Pokemon Emerald Version. Arcade Spot brings you the best games without downloading and a fun gaming experience on your computers, mobile phones, and tablets. New arcade games and the most popular free online games are added every day to the site.