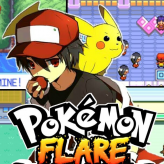 Capture and raise your Pokemon and have them ready for battle in this cool Pokemon hack for the Game Boy Advance. Try to catch them all in Pokemon Flare!

Pokemon Flare is on a third-person, overhead perspective. Players can access the menu in which they can set up their own preferences in playing. Wild animals can appear, and you have the option to capture it in turn-based combat. Moves can be selected, or you can choose the best one suited for this challenger. Hitpoints accumulate, and the battle ends when one Pokemon has zero HP. If you win the fight, all your owned creatures would no gain experience and level up. Catching a wild one depends on the type of Pokeball used and the HP of the captive. The game takes place in the fictional region of Kanto. Several species and towns are accessible only after you level up. Another part of the region accessible is the Sevii Islands, which reveal the latter part of the game. A rival is also given to the player, showing up in the game's first battle and will reappear throughout certain points. Professor oak also tasks you with an encyclopedia that indexes most of the Pokemon caught in the game. Beat gym leaders in the region to gain badges. This, in turn, would give you a chance to challenge the elite four.

Play Pokemon Flare game online in your browser free of charge on Arcade Spot. Pokemon Flare is a high quality game that works in all major modern web browsers. This online game is part of the Adventure, Strategy, GBA, and Pokemon gaming categories. Pokemon Flare has 2 likes from 2 user ratings. If you enjoy this game then also play games Pokemon Fire Red Version and Pokemon Emerald Version. Arcade Spot brings you the best games without downloading and a fun gaming experience on your computers, mobile phones, and tablets. New arcade games and the most popular free online games are added every day to the site.