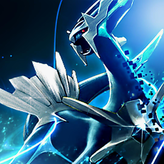 Step on a wild journey to capture one of the greatest Pokemon in history in this wonderful role-playing game – Pokemon Diamond! Pick a starter Pokemon and try to catch them all!

Pokemon Diamond Version is a role-playing adventure video game, and is one of the two Pokemon games to feature fourth generation Pokemon. Along with Pokemon Pearl Version, the game features the same gameplay as the previous Pokemon games, but is packed with loads of new and innovative things. The well-known Pokemon Contests also started in these two versions, where you pick your own Pokemon to fight against the others, not by skills or by might, but by beauty, charm, and passion. Winning the Pokemon Contests will award the winning Pokemon with ribbons.

There have been 25 likes from 30 votes on this game.

Play Pokemon Diamond game online in your browser free of charge on Arcade Spot. Pokemon Diamond is a high quality game that works in all major modern web browsers. This online game is part of the Adventure, Strategy, Pokemon, and GBC gaming categories. Pokemon Diamond has 25 likes from 30 user ratings. If you enjoy this game then also play games Pokemon Fire Red Version and Pokemon Emerald Version. Arcade Spot brings you the best games without downloading and a fun gaming experience on your computers, mobile phones, and tablets. New arcade games and the most popular free online games are added every day to the site.