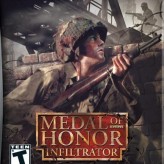 Sabotage enemy resources, capture key personnel, and join an all-out firefight in this action-packed shooting game – Medal of Honor: Infiltrator! Save the world from being dominated by the evil Nazis!

Medal of Honor: Infiltrator is a top-down third person shooting game and is the sixth installment of the award-winning Medal of Honor franchise. The game was released back in 2003 and was the second Medal of Honor game to be released for the Game Boy Advance (GBA) handheld system. Infiltrator is set during the World War II where you take control of Corporate Jake Murphy and infiltrate the enemy forces to win the war for your country. The game is mostly played in a third-person top-down perspective that focuses on exploration and action shoot-outs, however, sometimes the game shifts into the first-person shooter depending on the event of the game. Have fun!