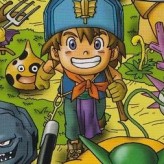 Your home island is sinking into the ocean and it’s up to you to save it! Train and breed an army of monsters in Dragon Warrior Monsters 2 – Cobi’s Journey! Form a team of monsters and unlock various worlds from Greatlog. Take turns while fighting monsters and use your superior strategy!

Dragon Warrior Monsters 2 – Cobi’s Journey (also known as Dragon Quest Monsters 2) is a Japanese role playing game (JRPG) created for the Game Boy Color and is the second Dragon Warior Monsters game for the GBC. The game is split into two versions: Cobi’s Journey, and Tara’s Adventure. The difference between the two versions are the character, and the monsters available. Have fun!