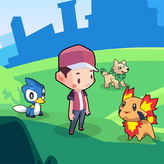 Chase your dreams of becoming the best monster trainer in this fantastic game based on Pokemon. Train your pet and get ready for the final boss fight in Dexomon. Collect a variety of monster pets and meet up with other trainers and people as you move forward.

Dexomon is a turn-based strategy adventure game with a similar game mechanic as the sensational Pokemon franchise. In this game, you will start with a Dexomon of your choice - each monster has its own set of attacks, stats, skills, and element. Elements play a heavy role in this game. Monsters with water elements deal heavy damage against monsters with fire elements. Similarly, Fire attacks are effective against monsters with Leaf elements, while Leaf-based attacks deal tremendous damage against Water-based monsters.

Choose carefully, as you might not get the chance to acquire all the other starting monsters on the journey. However, you may acquire other monsters and keep them in your party by capturing the wild monsters you meet along the way. You can keep a total of fifteen different monsters, and you may have at most three monsters to fight for you in every battle. Keep in mind that you can't capture monsters owned by other trainers.

Play Dexomon game online in your browser free of charge on Arcade Spot. Dexomon is a high quality game that works in all major modern web browsers. This online game is part of the Adventure, Strategy, Mobile, and Pokemon gaming categories. Dexomon has 4 likes from 5 user ratings. If you enjoy this game then also play games Pokemon Fire Red Version and Pokemon Emerald Version. Arcade Spot brings you the best games without downloading and a fun gaming experience on your computers, mobile phones, and tablets. New arcade games and the most popular free online games are added every day to the site.