Bulls Vs Lakers and the NBA Playoffs 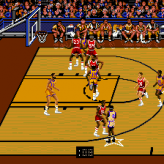 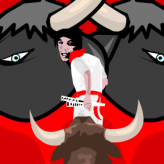 Running of the Bulls

Join the legends and compete against the best basketball teams during the 90s in this old-school basketball simulation video game – Bulls Vs Lakers and the NBA Playoffs! Compete in Exhibition mode or in Playoff mode and have fun!

Bulls Vs Lakers and the NBA Playoffs is a basketball sports simulation video game released for the SEGA Genesis gaming system back in 1991. The game is a sequel to the Lakers versus Celtics and focuses on the 1991 NBA Finals matchup between the Chicago Bulls and Los Angeles Lakers. The game is quite unique as it features a television broadcast-style presentation, and is the first basketball game to feature an in-game instant replay. The game allows the player to pick from one of the 16 teams that competed in the 1991 NBA Playoff.