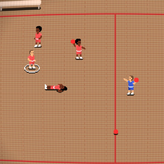 Bodge Dall is a funny retro-styled arcade game that features old-school style dodgeball. Throw the ball to the opposing team while avoiding their throws.

Dodge, duck, dip, dive, and dodge. Such are the wise words of Patches O’ Houlihan. Bodge Dall will let you play the popular physical education past time. Bodge Dall involves the rules of the popular past time in your console. Reminiscent of an old Atari game. Dodge Ball involves a team of one player on each side. The match starts with an even distribution of balls in the middle made of rubber and foam. Games can last for twenty minutes per half, a central dividing line. Players rush to the middle of the cour to grab one of the balls. The opening rush! Once everyone has retreated, players may now throw balls gathered and eliminate the other team. The team with the last man standing wins the games. The distribution of balls follows the aim of each player to hit the other. Own the blue sprite by hitting them with realistic ball sounds. In-game hints also show themselves to simulate gameplay. Press WASD to move and your directional buttons to dodge and catch the ball. Catch balls to increase your lives, giving you a better chance to win. You must time it carefully as the gamble of catching will put you in the bench quicker than you can say dodge! So, step into the arena and earn every right to be the Bodge Dall Champ!

Play Bodge Dall game online in your browser free of charge on Arcade Spot. Bodge Dall is a high quality game that works in all major modern web browsers. This online game is part of the Arcade and Action gaming categories. Bodge Dall has 7 likes from 12 user ratings. If you enjoy this game then also play games Super Smash Bros. and Tekken 3. Arcade Spot brings you the best games without downloading and a fun gaming experience on your computers, mobile phones, and tablets. New arcade games and the most popular free online games are added every day to the site.