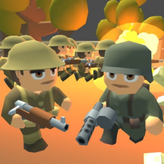 Deploy your soldiers and win the war in this fun action strategy game where you are the commander - WW1 Battle Simulator! Use your superior strategy and battle tactics to overcome the challenge. Destroy or capture the enemy base and win the war.

WW1 Battle Simulator, also known as WW1 Sim, is a war simulator that features cute characters themed after World War 1. This action-strategy game puts the player in the shoes of a commander capable of deploying troops in the battlefield to win the war. The game features a wide variety of units and tanks based on real-life soldiers, guns, and tanks during the WW1 time period. However, unlike the real battles, the soldiers and vehicles will mindlessly charge forward and there are no trenches to take cover on. The goal of the game is to simply overwhelm the opponent with the number and quality of soldiers you sortie on the battlefield. Proper management of resources and timing is required to breeze through the levels.

Play WW1 Battle Simulator game online in your browser free of charge on Arcade Spot. WW1 Battle Simulator is a high quality game that works in all major modern web browsers. This online game is part of the Strategy, Action, App, and Unity gaming categories. WW1 Battle Simulator has 2 likes from 2 user ratings. If you enjoy this game then also play games Sonic Battle and Bakugan: Battle Brawlers. Arcade Spot brings you the best games without downloading and a fun gaming experience on your computers, mobile phones, and tablets. New arcade games and the most popular free online games are added every day to the site.