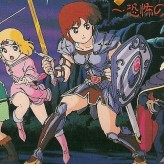 Assemble a group of heroes and hunt down the great evil that torments the land in this classic role-playing video game for the Nintendo Entertainment System (NES) – Ultima – Exodus!

Ultima – Exodus is a role-playing fantasy game where you must put together a team of any four characters and try to defeat the evil who has created havoc in the land of Britannia. Released in 1983, Exodus is the first Ultima game to be published by the Origins System. In this game, players will have to face the series’ main antagonist – Exodus. Your team of heroes must journey through hostile forests, dangerous oceans, and high mountains to defeat evil wherever they lurk. Find clues, search for gold, and explore dungeons to discover the hiding place of the great evil Exodus.

Play Ultima - Exodus game online in your browser free of charge on Arcade Spot. Ultima - Exodus is a high quality game that works in all major modern web browsers. This online game is part of the Adventure, Arcade, Emulator, and NES gaming categories. Ultima - Exodus has 1 likes from 1 user ratings. If you enjoy this game then also play games Ultimate Mortal Kombat Trilogy and Ultimate Spider-Man. Arcade Spot brings you the best games without downloading and a fun gaming experience on your computers, mobile phones, and tablets. New arcade games and the most popular free online games are added every day to the site.