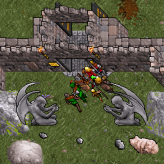 Return to the world of Britannia and face a new evil! Fight the threat brought by the mysterious cult and their enigmatic god in Ultima VII – The Black Gate! Defeat various machination and cunning opponents

Ultima VII – The Black Gate is an innovative Role Playing Game that brings massive changes to the Ultima series. The game is set two centuries since the last Avatar appeared in the Kingdom, and now a new threat rises with their enigmatic god known as the Guardian. Rid the world of Britannia from various monsters, and conspiracies! The game is released back in 1992 for the Super Nintendo Entertainment System (SNES) and features dramatic improvements to the layout, world, mechanics, and more from the last Ultima game. Have fun!