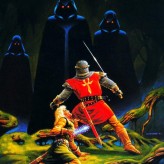 Lord British has been kidnapped! Go back to Britania to meet your old comrades and rescue Lord British from the enemies in Ultima V: Warriors of Destiny!

Ultima V: Warriors of Destiny is a classic 1988 role-playing video game and is the second game of the Enlightenment of the Ultima story trilogy. The game takes place after the events of the first game where your character got the title of Avatar. Upon returning, you found out that Lord British had just been kidnapped while you were away. Meet the new threats called ShadowLords and find a way to rescue Britania once again. Seek the help of your old companions and establish a firm alliance with new ones as you go on an epic quest. Good luck!