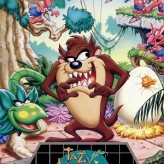 Taz became fascinated by the prospect of the potentially large omelet and leaves home to search for one. Join Taz in his unlikely adventure in Taz-Mania! Direct the cute and sneaky fellow as go through various stages in seach for the Lost Valley and its Giant Birds.

Taz-Mania is a 1992 2D side scrolling platformer game based on the Warner Bros. Cartoon character Taz-mania the devil and is based loosely on the cartoon series. In this game, the player takes control of the devilish cartoon character Taz with a whirlwind attack. Taz can jump, spin like a tornado, and eat various objects. Some items when eaten grant various effects like breathing fire for the chilli peppers, and so on. Have fun!

Play Taz-Mania game online in your browser free of charge on Arcade Spot. Taz-Mania is a high quality game that works in all major modern web browsers. This online game is part of the Adventure, Arcade, SEGA, and Anime gaming categories. Taz-Mania has 2 likes from 3 user ratings. If you enjoy this game then also play games Super Smash Flash 2 and Friday Night Funkin’ + Hatsune Miku. Arcade Spot brings you the best games without downloading and a fun gaming experience on your computers, mobile phones, and tablets. New arcade games and the most popular free online games are added every day to the site.