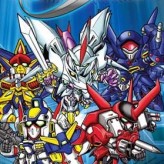 Be your own hero and enter the world filled with giant robots! Drive your very own mechanized humanoid mech and wage war with your allies in Super Robot Taisen – Original Generation!

Super Robot Taisen – Original Generation is a tactical role-playing game for the Game Boy Advance handheld system (GBA), featuring dozens of mobile suits, Gundams, and other mechanized robots from different anime and game franchises. Originally released back in 2002 in Japan, this game stars various original characters from the Super Robot Wars series. Defend the earth from an alien race and take the battle inside the planet or into the vastness of space. Customize your robot’s attack and defeat all your enemies strategically in this awesome turn-based strategy/ tactical role-playing game.